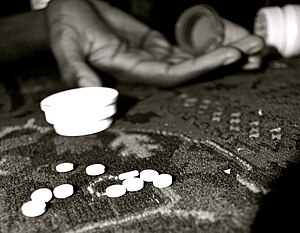 One of the challenges of parenting teenagers is to know when their behavior is normal and when they may be struggling in a way that requires professional help.  It is normal for teenagers to withdraw from their parents.  The need to develop a separate and individual identity is one of the developmental changes that need to happen during these years.  But for parents, a teen that is withholding and withdrawing in a healthy way and one that is struggling and suffering in an unhealthy way may not look that different.

Suicide is one of the leading causes of death amongst those ages 10 to 24 and more than half of all high school students admit to having suicidal thoughts in a survey done by the American Academy of Pediatrics.   In order to know when to be hands off and when to jump in, parents need to know the warning signs.

Being a teenager is tough.  Everything in their lives is changing at an accelerated pace and it can be hard for them to hold onto who they are as their identity, circle of friends, and even their body seems to be constantly shifting.  Teens that don’t have a reliable and trustworthy support system can easily become overwhelmed.  This kind of overwhelm can leave teens feeling as if they are alone in the world and cause them to disconnect from the support system they do have.  Overwhelm, disconnectedness, and feeling alone are all risk factors for suicide in teens.

Many teen suicide attempts can be linked back to a significant or stressful event.   Teens who were abused have a higher risk of suicide.  Girls think about suicide more often and are more likely to attempt it but boys are more likely to succeed in taking their own life.  Mental illnesses like depression and bipolar disorder are also risk factors and teens experiencing these problems should be monitored for the other signs of suicidal tendencies.  Teens who feel unsupported in their sexuality and sexual preference have a higher risk.  Teens who have attempted suicide before or who have a family history of suicide or mental illness also carry a higher risk.

Warning Signs to Watch For

Parents are the best defense in the fight to prevent teen suicide.  In order for parents to be able to help, however, they need to know what to watch out for and when to get help.  Here are some of the most common warning signs.

First and foremost, listen to your teenager.  One of the most common factors in teen suicide is that the person felt isolated, alone, and as if no one understood them.  Listening and allowing your teen to express the jumble of emotions they are experiencing without judgment or interruption can help them see they are not alone and that they do not have to figure out how to get through this on their own.  If you feel that your child is a danger to themselves, trust your gut and get help.  Don’t wait.  Find a professional that can help your child through the current crisis and build skills to boost their resilience as they move forward through the rest of their lives.